GIVE US THIS DAY OUR DAILY BREAD 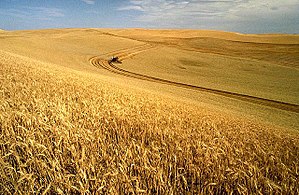 Here on our 20-acre homestead in north Idaho, we are continuously engaging in projects involving self-sufficiency and food independence. In this we’re not alone. There are expert gardeners all across America who produce most or all of their own fruits and vegetables. But very few have raised that most elemental and taken-for-granted grain in our diet, wheat.

North Idaho is wheat country. In August it’s a common sight to see massive combines rumbling across vast fields, chewing up wheat and spitting out chaff. Every identical strand is cut, every precious grain is captured. Nothing is wasted.

In contrast, the harvesting process for our plot was wildly inefficient, further handicapped by our ignorance. Scything is not perfect, and lots of stuff got missed. We harvested just a bit too late in the wheat’s maturity cycle, so some of the brittle wheat heads fell to the ground. We raked the entire field and bundled the wheat stalks into crude sheaves, but we missed a lot. (We also learned why gleaning the fallen seed heads was such an important part of the biblical economy.)

Harvesting this half-acre parcel took three days of hard work. One day was spent scything and beginning to rake. The next two days were spent raking and bundling the wheat into sheaves. Last of all we gathered the sheaves and put them away where the mice and chipmunks couldn’t get to them. Then finally, at last, we could rest our aching muscles and be thankful it was done. (See our photo essayhere..)

“Why don’t we just buy lots and lots of flour and store it?” grumped our older daughter, unable to appreciate the finer points of wheat production after fours hours of raking.

“What if we can’t buy flour?” I replied. And that sums up the philosophy behind our wheat-growing experiment. We no longer feel secure in being totally dependent on someone else for our food.

In my opinion, there are not enough people in this nation engaged in growing food. More>>>>>>>>>>

Things can seem really grim in the world of food freedom when farmers and food club members are jailed and squashed for providing fresh milk, while the media continues to spread outright lies about its consumption.

Just when it appears that the force, bans, food destruction, jail time, and deception are too much to handle – the people parry and thrust! In this dark cloud of oppression against health freedom and self-sufficiency, there are indeed some overlooked silver linings. For every bout of extreme force, there is a doubly powerful backlash.

There have been a handful of impressive rallies to defend raided small farms in the last year including the most recent one supporting Vernon Hershberger. Around 300 people showed up at his Wisconsin court hearing and were jam packed into the courtroom and basement during proceedings.

He refused to have a hearing without his own camera rolling and would not accept offers for settlement, i.e. reduced punishment for accepting guilt for four misdemeanors. The pressure from the crowd, his gentle constancy, and his recordings may have led the judge to rethink the call of prosecutors to punish him for violating bail terms. His trial date has been pushed to September.

Posted at 05:42 AM in Defend the Bill of Rights and Constitution, Food and Drink | Permalink | Comments (0)

Shocking: The FDA Says You Have No Right To Freedom Of Food

You thought you had the right to choose what you eat? The FDA says you don't. They claim that there is no fundamental right to choose your food or freedom to contract for it. Responding to a Farm-to-Consumer Legal Defense Fund lawsuit, the FDA clearly states that you do not have the right to freedom of choice in your diet.

The FTCLDF is a 501(c)(4) organization, which means that it exists to promote the social welfare of its members and community. They define their reason for being in one sentence:

Sustainable farming and direct farm-to-consumer transactions further the common good and general welfare of all Americans.

Their Mission Statement says, in whole:

The Farm-to-Consumer Legal Defense Fund is a 501 (c) (4) non-profit organization made up of farmers and consumers joining together and pooling resources to:

On behalf of its members and for all family farms in the US, the FTCLDF filed a lawsuit against the FDA, claiming "that the federal regulations (21 CFR 1240.61 and 21 CFR 131.110) banning raw milk for human consumption in interstate commerce are unconstitutional and outside of FDA's statutory authority as applied to FTCLDF's members and the named individual plaintiffs in the suit."

The FDA responded by claiming a number of things, including the absurd idea that the FTCLDF has no standing to file the case! That is, they're claiming that the organization that represents the people who have been harmed by the FDA's actions does not actually represent them. They claim that no harm has been shown, in spite of the fact that the FDA's actions have prevented farmers from producing and selling raw milk and their customers have lost the ability to obtain it.

Posted at 10:03 AM in American's fight for America!, Defend the Bill of Rights and Constitution, Food and Drink | Permalink | Comments (0)

Meat Glue Secret and your eating it!

What Are Chicken Nuggets Made Of?

Genetically modified foods have become so ubiquitous in the US that even the grocery store 'Whole Foods' now admits it cannot keep biotech foods off its shelves. A representative for the corporation acknowledged in May of 2011 that the realities of the marketplace have forced a shift in the company's previous no-GMO's policy.

Joe Dickson, quality standards coordinator for Whole Foods Markets, notes that GMO's dominate the market, especially for corn, soy and canola crops from which ingredients in most processed foods are derived. "Until there's federal government mandated labeling of GMO ingredients, there's no way to tell if packaged products contain GMO ingredients," Dickson said. "Our approach is to work in the spirit of partnership with our suppliers ... to encourage them to take active steps to avoid GMO ingredients."

In spite of public skepticism about GMO foods, the FDA has backed Monsanto and other corporations, declaring that modified foods do not require special labeling letting consumers know they are eating Frankenfoods. This is in contrast to the European Union, where public concern over health issues resulted in a moratorium on GMO's. Many European countries, including France, Germany, Greece, Austria and Luxembourg have banned genetically modified foods, while other countries in the EU permit their sale only when products include clear labels of GMO ingredients.

A yearlong sting operation, including aliases, a 5 a.m. surprise inspection and surreptitious purchases from an Amish farm in Pennsylvania, culminated in the federal government announcing this week that it has gone to court to stop Rainbow Acres Farm from selling its contraband to willing customers in the Washington area.

The product in question: unpasteurized milk.

It’s a battle that’s been going on behind the scenes for years, with natural foods advocates arguing that raw milk, as it’s also known, is healthier than the pasteurized product, while the Food and Drug Administration says raw milk can carry harmful bacteria such as salmonella, E. coli and listeria.

“It is the FDA’s position that raw milk should never be consumed,” said Tamara N. Ward, spokeswoman for the FDA, whose investigators have been looking into Rainbow Acres for months, and who finally last week filed a 10-page complaint in federal court in Pennsylvania seeking an order to stop the farm from shipping across state lines any more raw milk or dairy products made from it.

The farm’s owner, Dan Allgyer, didn’t respond to a message seeking comment, but his customers in the District of Columbia and Maryland were furious at what they said was government overreach.

“I look at this as the FDA is in cahoots with the large milk producers,” said Karin Edgett, a D.C. resident who buys directly from Rainbow Acres. “I don’t want the FDA and my tax dollars to go to shut down a farm that hasn’t had any complaints against it. They’re producing good food, and the consumers are extremely happy with it.”

The FDA’s actions stand in contrast to other areas where the Obama administration has said it will take a hands-off approach to violations of the law, including the use of medical marijuana in states that have approved it, and illegal-immigrant students and youths, whom the administration said recently will not be targets of their enforcement efforts.

Raw-milk devotees say pasteurization, the process of heating food to kill harmful organisms, eliminates good bacteria as well, and changes the taste and health benefits of the milk. Many raw-milk drinkers say they feel much healthier after changing over to it, and insist they should have the freedom of choice regarding their food.

One defense group says there are as many as 10 million raw-milk consumers in the country. Sales are perfectly legal in 10 states but illegal in 11 states and the District, with the other states having varying restrictions on purchase or consumption.

Many food safety researchers say pasteurization, which became widespread in the 1920s and 1930s, dramatically reduced instances of milk-transmitted diseases such as typhoid fever and diphtheria. The Centers for Disease Control and Prevention says there is no health benefit from raw milk that cannot be obtained from pasteurized milk.

Posted at 05:25 AM in Big Brother is Watching, Defend the Bill of Rights and Constitution, Food and Drink | Permalink | Comments (0)