Leading Democratic presidential candidates Bernie Sanders, Joe Biden and Michael Bloomberg have paid a combined $466,000 to superdelegates who are likely to support their benefactors in the event of a contested convention, Federal Election Commission records show.

Sanders has spent the most so far on employing superdelegates, FEC records show. His campaign co-chair, former Ohio state senator and Democratic National Committee member Nina Turner, has received $149,000 from the democratic socialist’s campaign. The Vermont senator has also divvied out $53,000 to his California political director, DNC member Susie Shannon.

Turner and Shannon are superdelegates by virtue of being members of the DNC. The two surrogates would be able to cast ballots for their boss if a second round of voting is required at the Democratic National Convention in July, which would be triggered if no candidate wins at least 50% of the delegates during the primaries and caucuses. 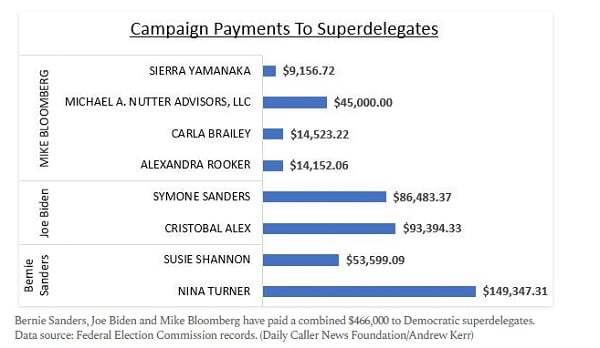 Biden, the former vice president, is just behind Sanders in superdelegate spending, disbursing a combined $180,000 to DNC members Symone Sanders and Cristobal Alex, according to FEC records.

Terrifying footage shows the fearless Cape ground squirrel leaping at the poisonous snake and trying to distract it with its tail in Kgalagadi Transfrontier Park, South Africa. Safari guide Dave Pusey, 41, who took the footage, said he had been coming to the park for years but had never witnessed a battle like this. He thought the rodent could have had babies in a burrow nearby, which she was protecting. Ground squirrels are known to mob snakes despite the risks.

Because when 100% of the people have guns, not even idiots want to try and shoot you!

Switzerland hasn't had a mass shooting since 2001, when a man stormed the local parliament in Zug, killing 14 people and then himself.

The country has about 2 million privately owned guns in a nation of 8.3 million people. In 2016, the country had 47 homicides with firearms. The country's overall murder rate is near zero.

The National Rifle Association often points to Switzerland to argue that more rules on gun ownership aren't necessary. In 2016, the NRA said on its blog that the European country had one of the lowest murder rates in the world while still having millions of privately owned guns and a few hunting weapons that don't even require a permit.

But the Swiss have some specific rules and regulations for gun use.

Thousands march for gun control in SF and Oakland
People took to the streets to demand stricter gun laws in San Francisco and Oakland on Saturday.

People took to the streets to demand stricter gun laws in San Francisco and Oakland on Saturday.

Business Insider took a look at the country's past with guns to see why it has lower rates of gun violence than the US.

THE REMARKABLE FAITH OF THE ATHEIST

Hanne Nabintu Herland asserts, 'there is no such thing as a non-religious man'

As traditional belief in religion is viewed with increasing skepticism among the elites, the media and academia in the West, the argument can be made that an atheist is just as religious as any Christian. Theologian Paul Tillich defined religion as “that which is man’s true concern.” Whatever is most important to the human being becomes his religion, his passion – his everything, as faith addresses the need to find meaning in existence and presents models that logically may explain the meaning of life.

The German philosopher Martin Heidegger, one of the most influential thinkers of the 20th century, once said in a German TV interview: “I would say that men, for example, Communists, have a religion when they believe in modern science. They believe absolutely in modern science. And this is absolutely faith, that is, the trust in the certainty of the results of science, is a faith, and is, in a certain sense, something that emanates from people, and is therefore a religion. And I would say no one is without religion, and every person transcends himself, in a way, that is they are dispatched.”

According to the definition of religion, whatever is essential in someone’s life, whatever he desperately believes in and advocates for and clings onto in times of trouble, may be labeled his religion. Whatever your heart confides in is your God.

In the old classic “Thought and Belief,” sociologist Rudolph Arendt adds a twist by defining religion as man’s ultimate goal. Man’s religion is his all-absorbing attitude toward existence, the foundation upon which he rests his life. According to his view, religion may be found in the transcendental realm, in traditional religions with the belief in God and the supernatural, or it may be found in the material or physical, profane world.

Arendt emphasizes that according to such a broad definition of religion, there is no such thing as a non-religious man or a nonbeliever. We all strongly believe in something. That which you find to be the very most important thing in your life is your religion – your encompassing, all absorbing beliefs and ideals, that which is at the core of your being, at the heart of your desires, the goal of your life.

Sound Science and the Bible Do They Conflict?

School children today are routinely taught that we live in an expanding universe that is around 14 billion years old. This perspective is so widespread that it’s strange to realize that it represented a dramatic upheaval in the fields of physics and astronomy about 100 years ago!

Just 150 years ago, the idea of evolution was popularized in Charles Darwin’s On the Origin of Species, and, along with it, the underpinning of a fully secular explanation for the origin and diversity of life on earth. Subsequent developments in the fields of microbiology, genetics and biochemistry have been incorporated into the theory of evolution, but not without revealing an overwhelming degree of complexity and diversity that brings the viability of the theory itself into serious question.

Additionally, the modern academic reckoning of the age of the universe puts a hard limit on the amount of time available for the supposed natural processes of evolution to occur, and no well-established findings have explained this glaring discrepancy.

Taken altogether, the last 150 years of scientific discovery undeniably point to a Creator—and not just any Creator! These advancements confirm certain biblical statements about God’s creation of both the universe and the life we see.

However, this has not lessened objections and denial by secular thinkers, which has ironically resulted in ever-more outlandish and improbable explanations rooted not in scientific fact, but in philosophical approaches that deny even the possibility of a divine Creator!

In the ongoing struggle for sound science, why does it seem that the great minds of humanity today cannot come to terms with the existence of God?

Are dead bodies attracting biblical swarms of crows in China?

Video making its way out of China shows massive murders of crows circling infected cities in the mainland.

Coupled with reports of dead bodies and local folklore about the bird, their appearance is causing a sense of dread for those who see the hordes of feathered beasts.

Many of the videos popping up recently were recorded near the city of Wuhan, where the deadly COVID-19 virus first originated months ago.

Although the clips are taken from all around Hubei province, they all show an unsettling amount of crows ominously wheeling overhead.

One video reportedly from Hanchuan, a city next to Wuhan, shows an entire murder of crows darkening the sky as they fly in all directions. Nearby trees can be seen crowded with the black birds.

TRENDING: Limbaugh: Coronavirus is less deadly than flu, but 'weaponized' to bring down Trump

Another video supposedly taken from nearby Jingzhou shows a large group of the birds circling overhead as if waiting for a feast.

The Day Andy Warhol was shot dead- Then brought back to life! 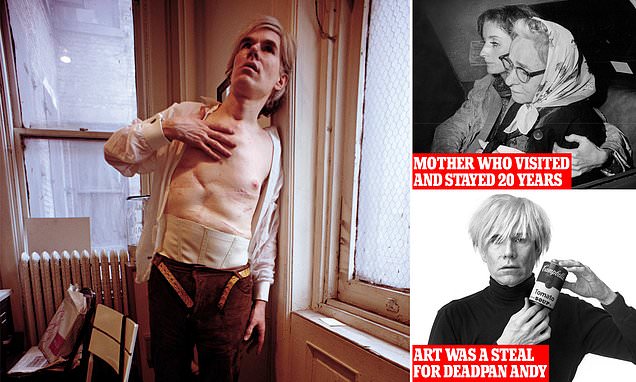 CHRISTOPHER STEVENS: At 4.51pm, Warhol died. That, at least, was the verdict of the interns and residents in the emergency room of Columbus Hospital in New York. The young doctors couldn't find a pulse. There was no blood pressure to speak of. The patient's colour was grey tinged with blue. He was DOA: dead on arrival. He is pictured left showing his operation scars and surgical corset that he had to wear. At the moment Warhol was being wheeled in, a gifted surgeon in private practice named Giuseppe Rossi was checking on a patient recovering in the intensive care unit. Rossi heard the call for a doctor to come to the aid of a shooting victim on the public address system and rushed to ER to see if he was needed. As the juniors filled him in on the case, he reached out to make one final check on the fresh corpse where it lay unmoving, eyes closed, soaking the trolley in blood.

The Day Andy Warhol was shot dead: New book details how a radical feminist who wanted to rid the world of men 'killed' the avant-garde artist... until a miracle doctor brought him back to life

Israeli scientists say they are just WEEKS away from coronavirus vaccine

Will the cure be worse than the virus!!!! Vaccines kill! 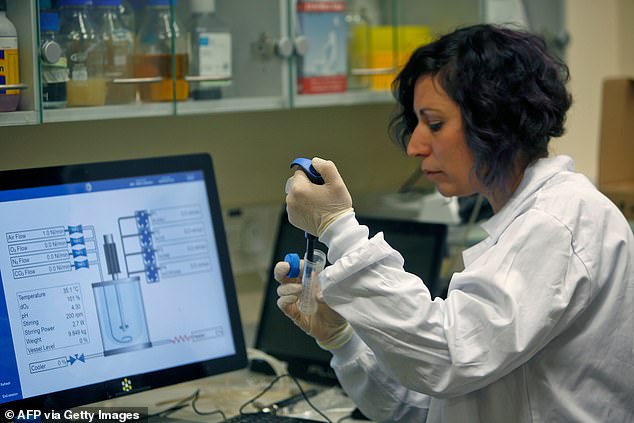 An Israeli scientist works at a laboratory at the MIGAL Research Institute. Scientists there say they are just weeks away from developing an oral vaccine which will beat coronavirus

Scientists in Israel say they are just weeks away from developing an oral vaccine which will beat coronavirus.

Officials in the country expect the drug to be available within 90 days after it has completed the necessary testing.

'I am confident there will be further rapid progress, enabling us to provide a needed response to the grave global COVID-19 threat.'

Scientists at MIGAL confirmed they have been working on a vaccine against infectious bronchitis virus (IBV) found in poultry.

It has been tested at the Veterinary Institute where its said to have been proven effective. 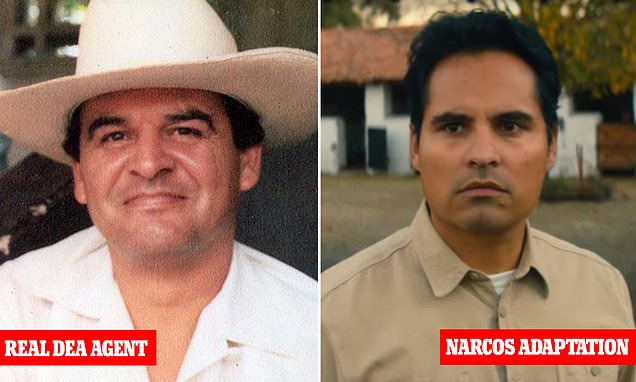 A CIA operative conspired with a drug kingpin to plan the brutal murder of a DEA Agent, according to multiple witnesses who have been re-interviewed about the 1985 case.  Enrique 'Kiki' Camarena, 37,  was working for the US government in Guadalajara, Mexico when he was abducted, tortured and killed by cartel members in February 1985.

MORE:   DEA agent whose brutal death featured in Narcos was BETRAYED by CIA agent in 1985, according to three new witnesses as the case is re-investigated and his widow demands the truth