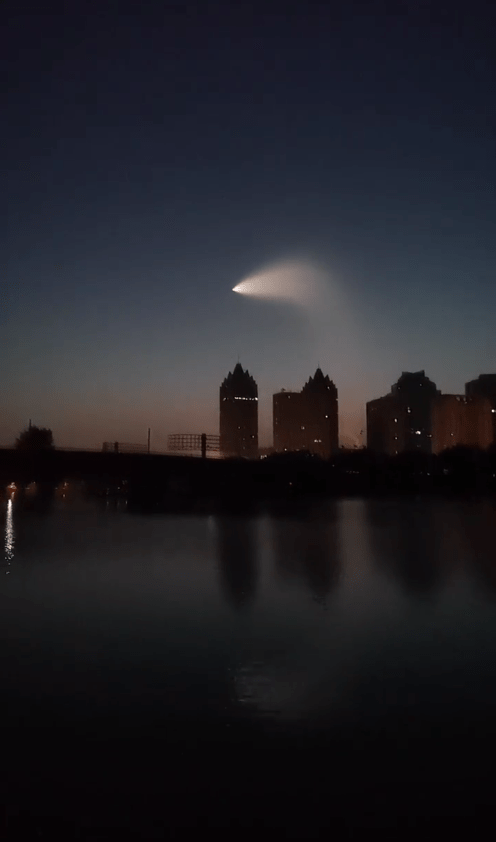 1 On June 24th(5th day of 4thmonth) of my 13th year, while I was with the Judean exiles beside the Kebar River in Babylon, the heavens were opened to me, and I saw visions of God(Elohim-The Godhead).

13 is the number of Joseph's youngest son—The USA 2 This happened during the fifth year of King Jehoiachin's captivity.

3 The LORD(Jesus) spoke his word to me (the priest Ezekiel), son of Buzi, in Babylon by the Chebar River. The power of the LORD(Jesus) came over me(Ezekiel).

SEEING GOD as a TORNADO!

4 As I looked, I saw a tornado coming from the north. There was an immense cloud with flashing lightning surrounded by a bright light. The middle of the lightning looked like glowing metal.

5 In the center of the cloud I saw what looked like four living beings. They were shaped like humans,

6 but each of them had four faces and four wings.

Not only were there four distinct living creatures, but each of the four had four faces, making sixteen in all. The four living creatures of the cherubim answer by contrast to the four world monarchies represented by four beasts, Assyria, Persia, Greece, and Rome ( Daniel 7:1-28 ). The Fathers identified them with the four Gospels: Matthew the lion, Mark the ox, Luke the man, John the eagle. Two cherubim only stood over the ark in the temple; two more are now added, to imply that, while the law is retained as the basis, a new form is needed to be added to impart new life to it. The number four may have respect to the four quarters of the world, to imply that God's angels execute His commands everywhere. Each head in front had the face of a man as the primary and prominent one: on the right the face of a lion, on the left the face of an ox, above from behind the face of an eagle. The Mosaic cherubim were similar, only that the human faces were put looking towards each other, and towards the mercy seat between, being formed out of the same mass of pure gold as the latter ( Exodus 25:19 Exodus 25:20 ). In Isaiah 6:2 two wings are added to cover their countenances; because there they stand by the throne, here under the throne; there God deigns to consult them, and His condescension calls forth their humility, so that they veil their faces before Him; here they execute His commands. The face expresses their intelligence; the wings, their rapidity in fulfilling God's will. The Shekinah or flame, that signified God's presence, and the written name, JEHOVAH, occupied the intervening space between the cherubim Genesis 4:14 Genesis 4:16 , 3:24 ("placed"; properly, "to place in a tabernacle"), imply that the cherubim were appointed at the fall as symbols of God's presence in a consecrated place, and that man was to worship there. In the patriarchal dispensation when the flood had caused the removal of the cherubim from Eden, seraphim or teraphim (Chaldean dialect) were made as models of them for domestic use ( Genesis 31:19 , Margin; Genesis 31:30 ). The silence of the twenty-fifth and twenty-sixth chapters of Exodus to their configuration, whereas everything else is minutely described, is because their form was so well-known already to Bezaleel and all Israel by tradition as to need no detailed description. Hence Ezekiel ( Ezekiel 10:20 ) at once knows them, for he had seen them repeatedly in the carved work of the outer sanctuary of Solomon's temple ( 1 Kings 6:23-29 ). He therefore consoles the exiles with the hope of having the same cherubim in the renovated temple which should be reared; and he assures them that the same God who dwelt between the cherubim of the temple would be still with His people by the Chebar. But they were not in Zerubbabel's temple; therefore Ezekiel's foretold temple, if literal, is yet future. The ox is selected as chief of the tame animals, the lion among the wild, the eagle among birds, and man the head of all, in his ideal, realized by the Lord Jesus, combining all the excellencies of the animal kingdom. The cherubim probably represent the ruling powers by which God acts in the natural and moral world. Hence they sometimes answer to the ministering angels; elsewhere, to the redeemed saints (the elect Church) through whom, as by the angels, God shall hereafter rule the world and proclaim the manifold wisdom of God ( Matthew 19:28 , 1 Corinthians 6:2 , Ephesians 3:10 , Revelation 3:21 , 4:6-8 ). The "lions" and "oxen," amidst "palms" and "open flowers" carved in the temple, were the four-faced cherubim which, being traced on a flat surface, presented only one aspect of the four. The human-headed winged bulls and eagle- headed gods found in Nineveh, sculptured amidst palms and tulip-shaped flowers, were borrowed by corrupted tradition from the cherubim placed in Eden near its fruits and flowers. So the Aaronic calf ( Exodus 32:4Exodus 32:5 ) and Jeroboam's calves at Dan and Beth-el, a schismatic imitation of the sacred symbols in the temple at Jerusalem. So the ox figures of Apis on the sacred arks of Egypt.

7 Their legs were straight, their feet were like those of calves, and they shone like polished bronze.

8 They had human hands under their wings on each of their four sides. All four of them had faces and wings.

9 Their wings touched each other. The beings went straight ahead, and they did not turn as they moved.

11 Each had two pairs of outstretched wings – one pair stretched out to touch the wings of the living beings on either side of it, and the other pair covered its body.

12 They went in whatever direction the Spirit(ruwach) chose, and they moved straight forward in all directions without having to turn around.

13 The living beings looked like burning coals and torches. Fire moved back and forth between them. The fire was bright, and lightning came out of the fire.

14 The living beings ran back and forth like lightning.

15 As I looked at them, I saw {what appeared to be a gyro} [wheel] on the ground beside each of them.

16 The wheels sparkled as if made of beryl. All four wheels looked the same; each wheel had a second wheel turning crosswise within it, {like a gyroscope}.

17 Whenever they moved, they moved in any of the four directions without turning as they moved.

18 The rims of the wheels were large and frightening. They were covered with eyes.

20 Wherever their Spirit(ruwach) wanted to go, the beings went. The wheels rose with them, because the spirit of the living beings was in the wheels.

Wheels: gyros -When the heavens opened and the prophet Ezekiel saw visions of God, he saw four living beings, each with a wheel on the earth beside the beings (Ezek 1:15)—and the appearance of each wheel and their construction was as "a wheel within a wheel" (v. 16). Their construction were as gyroscopes used for navigation. And the texture of Scripture is as wheels within wheels, or as shadows in a hall of mirrors. It is this texture of Scripture that navigates disciples into the promised land of Christ’s rest.

25 A voice came from above the dome over their heads as they stood still with their wings lowered.

The Godhead appears in the likeness of enthroned humanity, as in Exodus 24:10 . Besides the "paved work of a sapphire stone, as it were the body of heaven in clearness," there, we have here the "throne," and God "as a man," with the "appearance of fire round about." This last was a prelude of the incarnation of Messiah, but in His character as Saviour and as Judge ( Revelation 19:11-16 ). The azure sapphire answers to the color of the sky. As others are called "sons of God," but He "the Son of God," so others are called "sons of man" ( Ezekiel 2:1 Ezekiel 2:3 ), but He "the Son of man" ( Matthew 16:13 ), being the embodied representative of humanity and the whole human race; as, on the other hand, He is the representative of "the fulness of the Godhead" ( Colossians 2:9 ). While the cherubim are movable, the throne above, and Jehovah who moves them, are firmly fixed. It is good news to man, that the throne above is filled by One who even there appears as "a man." (Jamieson)

28 The brightness all around him looked like a rainbow in the clouds. This was the way the glory of the LORD(Jesus) appeared to me. When I saw it, I fell face down in the dust, and I heard someone's voice speaking to me.

rainbow-the symbol of the sure covenant of mercy to God's children remembered amidst judgments on the wicked; as in the flood in Noah's days ( Revelation 4:3 ). "Like hanging out from the throne of the Eternal a fing of peace, assuring all that the purpose of Heaven was to preserve rather than to destroy. Even if the divine work should require a deluge of wrath, still the faithfulness of God would only shine forth the more brightly at last to the children of promise, in consequence of the tribulations needed to prepare for the ultimate good" [FAIRBAIRN].

So, as you can see, the Bible gives the only extra-terrestrial version of a UFO. It is Jesus or and Angel! It's that simple.  What is happening in China is one of these two examples mentioned above. Man made, or God made.  I suggest as of now, these are man made of some sort, be it a hoax, or military craft.