He has been dead for 1,200 years – but only now have scientists finally identified the bones of Charlemagne.

After 26 years of research, German scientists are satisfied that bones held for centuries at Aachen Cathedral, Germany, are those of the king of the Franks, who is also known as the father of Europe.

They said that the bones came from an older man who was tall and thin. 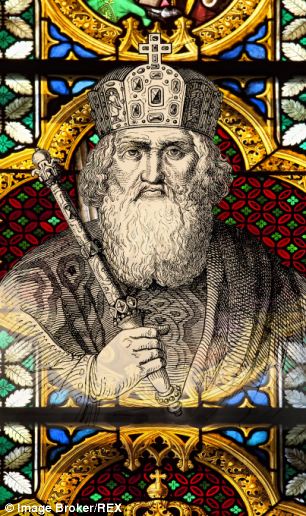 1,200 years after the death of Charlemagne - king of the Franks - (pictured right in a stained glass window right) scientists  have confirmed that bones (pictured left) thought to be the emperor's do indeed belong to him and they paint a picture of a tall, slim, older man

Charles the Great, King of the Franks, ruled a European empire from 768 based mainly around France, Germany and parts of Italy.

Called the 'Father of Europe' he united most of Western Europe for the first time since the Roman Empire.

His rule spurred the Carolingian Renaissance - a period of cultural and intellectual activity within the Catholic Church.

Both the French and German monarchies considered their kingdoms to be descendants of Charlemagne's empire.

Although he could not write, he spoke Teutonic, Latin and Greek.

He was 6ft 4in - a monstrous height for the period, which has been confirmed by measurement of his skeleton.

Oddly, his father was known as Pepin the Short and was around 5ft tall.

Charlemagne's first campaign came at the age of 27, when the Pope sought his aid in repelling the Lombards of Italy.

He conquered them in the field and took the crown of Lombardy as his own.

From his capital of Aachen in modern-day Germany, Charlemagne went on to fight 53 campaigns, most of which he led himself.

He defended a Christian Europe from Muslim Saracens and pagan Saxons, often beheading thousands in a single day.

He is thought to have died aged 72 from a fever, but study of the ancient bones has not confirmed this.

A total of 94 bones and fragments were analysed from the cathedral and are believed to belong to the founder of the Holy Roman Empire.

The sarcophagus holding the remains was secretly opened in 1988 and there were high hopes that the bones belonged to Europe’s first emperor after the fall of the Roman Empire, German newspaper, The Local reported.

Professor Frank Rühli, of the University of Zurich, Switzerland, who was among the scientists studying the remains, said: ‘Thanks to the results from 1988 up until today, we can say with great likelihood that we are dealing with the skeleton of Charlemagne.’

The team of researchers studied the dimensions of the thigh, shin and upper arm bones to get an idea of the man’s height and build – which match the descriptions of the emperor.

The man now confirmed to be Charlemagne, was six feet tall (1.84metres) weighed around 12stone 3lbs (78kg) and had a slim build.

Historians have previously estimated the emperor’s height to be between 1.79metres and 1.92metres tall.

One Medieval biographer, Einhard the Frank, wrote that Charlemagne walked with a limp in his later years, which the scientists now think could be true.

They found that the skeleton’s kneecap and heel bones had deposits that would indicate an injury of some sort.

But they didn’t find any new evidence to suggest that he died of pneumonia – or other clues about his later health – which would back up other accounts. 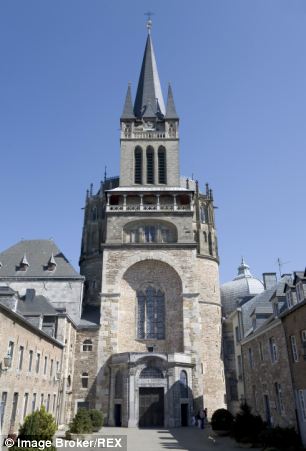 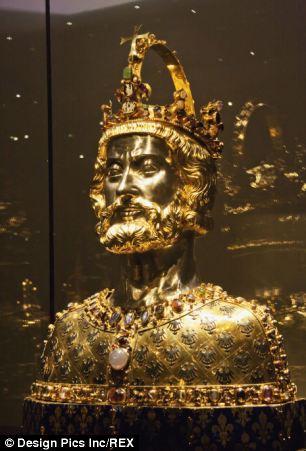 A total of 94 bones and fragments were analysed from Aachen Cathedral, Germany (pictured left) and are believed to belong to the founder of the Holy Roman Empire. The golden bust of Charlemagne, on display in the Domschatzkammer - the treasury of the cathedral - is pictured right

Historians have traditionally described the work as the first example of a biography of a European king and think it was written after Charlemagne's death.

The book contains intimate glimpses of Charlemagne's personal habits and tastes, which he was knowledgeable about as he was part of the emperor's Charlemagne's court.

Most of the skeleton was discovered in the king’s golden tomb, while a few fragments of his skull were collected from inside a bust of the late emperor.

It is thought that some of the missing bones ended up as relics, which were given away at the time of Charlemagne’s death. 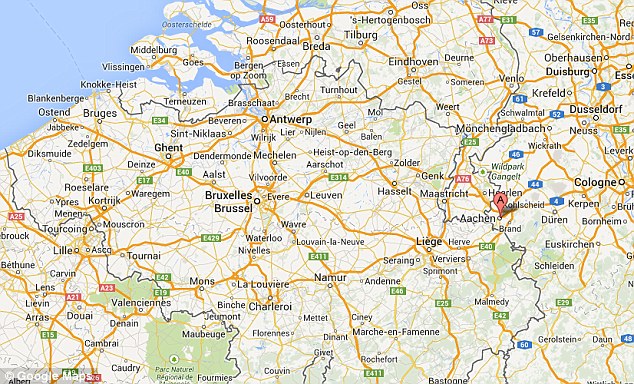 The bones were held for centuries at Aachen Cathedral, Germany (pictured) 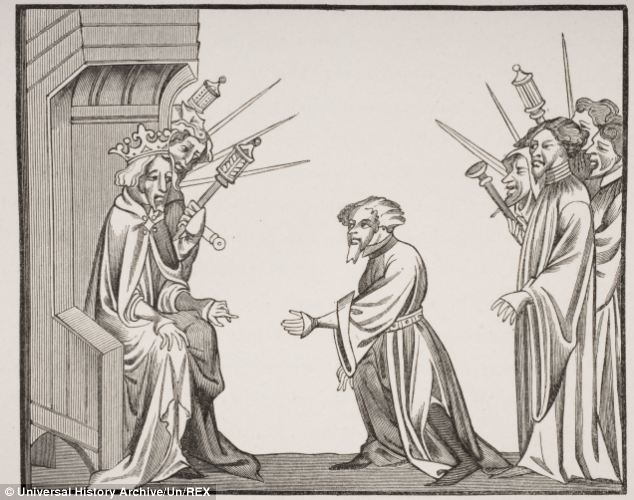 Medieval biographer Einhard the Frank wrote that Charlemagne walked with a limp in his later years and now scientists found that the skeleton's kneecap and heel bones had deposits that would indicate an injury of some sort. In this 14th century illustration, he is shown receiving the oath of fidelity and homage from a baron