The Plain Truth about the Patriot Act

Posted at 07:22 AM in America in Prophecy, American's fight for America!, Big Brother is Watching | Permalink | Comments (0)

The Savage Side of Racing

Many of us older racing fans long for the days of the grass roots racing of the 60's and 70's when great drivers such as AJ Foyt, Richard Petty and Johnny Rutherford was the mega-stars of their day. Even non-racing enthusiasts knew who they were and fans saw them as giants with abilities far superior than the rest of us, handling cars at speeds not even comprehendable to the average fan.

Things changed, Indy car racing became the national sport of the third world, but it lost its unique American flavor by the early 1990's. NASCAR, however continued to grow and dominate the world's racing scene throughout the 80' and 90's and actually began to rival baseball and football in fan attendance and loyalty. Then something happened. Actually, I believe two distinct "wounds" occurred in NASCAR which started a decline in the sport that we see to this day. The first wound was that of the death of Dale Earnhardt. He was a super star equal to any baseball or football star, and was killed at the home of NASCAR and the biggest race in that organization's year- The Daytona 500.  The Daytona 500 is the Super Bowl of NASCAR racing, and it would be as an American icon football player was killed while playing in the Super Bowl.  It shocked the sport. Then that shock turned to anger against NASCAR. To the fans, somehow NASCAR covered up the truth of the death, or worse, was even responsible.

The second wound was even worse for NASCAR. NASCAR, like the proverbial doctor who leaves the wife who put him through med school while working 12 hours a day in some diner, for his 23 year old bimbo nurse!  The wife gets mad!  NASCAR wanted to expand outside the South East. That was understandable. However, when they did this, they turned their back on the girl who paid their way through college--The Southern fan!  They began to take dates away from famous Southern races like at Darlington and moved them to other parts of the country. Owners of tracks, like Bruton Smith started buying up Southern tracks, closing them down and moving the coveted date to other tracks, including one in Yankee land - New Hampshire!  Then Rockingham lost all of their dates, and ceased being a NASCAR track.  This final straw, coupled with the loss of Dale Earnhardt spelled a messy divorce between the owners of NASCAR (The France Family) and the fan base. It has never recovered.

This weekend, racing websites like www.racerap.com are filled with this feud, and the down-right hatred that the Southern race fan now has for the sport they once loved. Many claim that they will not even watch today's race. It's boring. It's fixed. It's just not real racing.

In some aspects I agree, in others I do not. NASCAR does need to listen to their fans again. In my opinion, the France family needs to step down from the public decision making of their sport and start to hire the experts and the "names" needed to bring back that loyal fan base. Ford Motor Company did it, the France's need to do it too.

However, the fan must also remember that the same people who helped build the sport, laid the seeds of its trouble today. "Big" Bill France broke the driver's union and forced an unsafe race to occur in 1969 Talledega. The top names boycotted the race, but France found others to take their place. The message? Safety came second in NASCAR. The result? Watch the videos below and look at the photograph to one of the most horrendous accidents to have ever happened on a race track. It was actually replayed on ABC Wide World of Sports! Yes, not everything was great about racing "back in the day!"

Continue reading "The Savage Side of Racing" »

The Fall Of Egypt And The Worldwide Plan Of Tyranny

So have you wondered what those criminal Rothschild devils are doing toward the one world government lately? Well, their lieutenant, Darth Soros, is hard at work to team together the muslim brotherhood of evil and the marxist communists and socialists across the Middle East. This effort is visible as these as these key players have effected the overthrow of Egypt’s government, and are currently moving across the Middle East to do the same elsewhere.

And even America’s very own marxist traitor to the U.S. Constitution, Obama himself, is lending a hand toward this worldwide revolution, just read on and see. This excellent article was written by Terresa Monroe-Hamilton over at NoisyRoom.net:

“Over the last couple of weeks, I have heard many ask who was behind the Egyptian Revolution. Few will admit what should be obvious to all by now. Forces that I consider to be nothing short of evil have joined in what they see as their 'chance' to bring down the West and capitalism; to replace it with their given ideology du jour... Whether it be Islamofascism, Socialism, Communism or a progressive mixture of a number of isms, they look to ring the death knell of Western society and bring it down through glorious revolution and chaos. And the international dominoes have started to fall.

The Egyptian and Tunisian revolutions did not just spontaneously erupt. No... They are well planned, drawn out, militant efforts to bring about revolutionary change on a global scale. This will be done using the Internet and the young, who will be manipulated into revolt, with either legitimate causes, manufactured wrongs or a combination of both. Enter The Alliance for Youth Movements (AYM). From The Daily Bell:

The latest and most astonishing global gambit is called AYM and Wikipedia provides us some information about the group, as follows: "The Alliance for Youth Movements (AYM) began with a December 2008 summit in New York City to identify, convene, and engage 21st century movements online for the first time in history. The United States Department of State partnered with Facebook, Howcast, MTV, Google, YouTube, AT&T, JetBlue, Gen-Next, Access 360 Media, and Columbia Law School to launch a global network and empower young people mobilizing against violence and oppression.”     MORE

Posted at 08:03 AM in Current Affairs, The Middle East and Prophecy | Permalink | Comments (0)

America’s Godly heritage has come under attack from every angle. Like holocaust deniers, there are those who have revised history to demonize America’s Founders and disparage their faith and actions.
Let us reject the lies of Godless fools to the contrary, for any person who has objectively studied the matter must concede that this Nation was found upon Christian ideology and morality. Our Founders actually acknowledged that Christianity was SUPERIOR to other belief systems in their establishment of this Nation upon the Word of God, His laws and timeless truth.   MORE 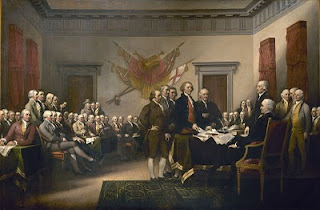 Yes things are bad, but what can we do? Intolerable acts drove colonial men subjected to the sting of tyranny into action over two centuries years ago. Before the great battles of the American Revolution took place and the victory that followed, the Founding Fathers took it upon themselves to declare their independence not only by writ, but also by action. Our Founding Fathers ceased the import of British goods, they created their own monetary system, they assembled their own militias, and most importantly they formed their own government based upon their own values, not King George's self-interest.

This truly measurable independence turned out to be the key to their success, for independence is freedom, and freedom from tyranny is victory. The battle they fought was not one to free themselves, instead, it was fought to defend the freedom from the British system they had already achieved.

Digging on Temple Mount 'to Erase Traces of Jewish Altar'

Muslim religious authorities are concluding a clandestine eight-month dig on the Temple Mount that is intended to erase traces of the Jewish Temple's Altar, Temple activists charge.

The digs have been taking place under the Dome of the Chain, believed to have been built over 1300 years ago. For eight months, the dome - which has a diameter of 14 meters - has been surrounded by a metal fence and black cloth, which hide whatever activity has been going on there from outside inspection. The Muslim Waqf religious authority has claimed the activity is simply a refurbishing of the structure, but refuses adamantly to let Jews or tourists near.
Jewish activists made various attempts to enter the Dome, but met with no success. In the end, the Our Temple Mount news outlet found an Arab who was willing to take photos inside the compound in return for a handsome fee (see below). The man said that it appears the Waqf has already completed its digs and is now covering the dig with dirt.
Our Temple Mount notes that according to Jewish tradition, the place where the Dome of the Chain is located is the spot upon which the sacrificial Altar stood in Temple times. Temple activists said that the Muslim digs are intended to erase the Jewish connection to the Temple Mount.
Photos show the work at different stages:

View all of Jim's articles

While the news media continue its Egyptian-uprising coverage, most of the denizens of U.S. newsrooms are turning a blind eye to President Barack Obama's connection to a key player in the Egyptian rebellion: the radical Islamic group known as the Muslim Brotherhood which co-sponsored last year's disasterous "Gaza Aid Flotilla."

While the world condemned the actions of the Israeli military, calls for an international body to investigate the Gaza flotilla raid by Israeli forces -- in which nine "peace activists" were killed -- were clouded by political posturing and vitriolic soundbites, according to some U.S. counterterrorism experts.
Even President Obama proposed an independent inquiry into the incident that triggered worldwide condemnation of Israel especially by members of the elite news media, but his proposal was quickly dropped as information came to light that certain individuals close to him and the Democrat Party were involved in the bloody incident.
Continue reading on Examiner.com: Obama linked to Egyptian Muslim Brotherhood - National Law Enforcement | Examiner.com http://www.examiner.com/law-enforcement-in-national/obama-linked-to-egyptian-muslim-brotherhood#ixzz1DCBAg9C9